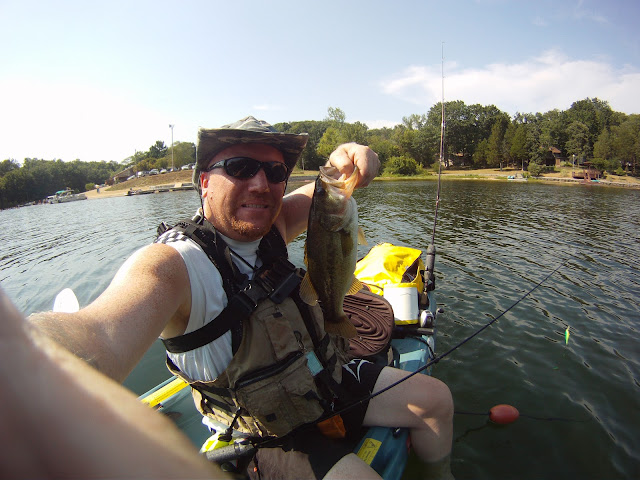 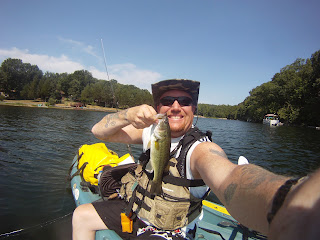 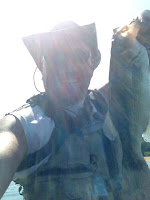 This is a combined report from (2) trips I took to the always wonderful Lake Sherwood, MO.  Sherwood is a private, gated community with several lakes.  I prefer to fish the main lake for bass and monster bluegill.  Both times I fished the lake, the temperatures were about 100 degrees, with very warm water temps. 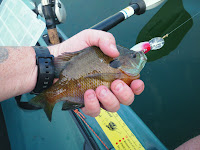 The first trip I had a ton of success on Largemouth bass (which is what I was fishing for).  I had a fire tiger bright colored Rapala medium diving crank bait.  There were a lot of casts involved, but caught over (8) that day, as well as a catfish that I was unable to land (I knew if was a catfish due to the fight and the slime left all over the line when he spit the lure out).  Most people I spoke with that are familiar with the waters said that the fishing was slow, but I think I figured out what the deal was.  The bass were laying at the bottom of the lake, in the middle of the arms in about 15' of water in the heavy vegetation.  When that lure when by, they jumped up to hit it (hence having to cast a ton of times before a bite). 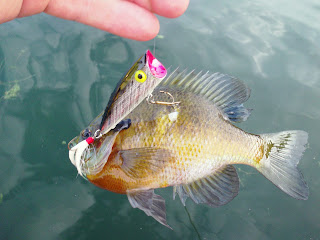 The second trip the conditions seemed very similar, but no such luck.  A storm front was getting ready to move in, and I started to throw a Rebel topwater plug.  What was interesting was the fact that no bass were caught, however, I caught several good sized bluegills off my efforts.  Makes me think I should come back with a fly rod and a bunch of smaller sized poppers....hmm.....

Posted by miketobin at 10:21 AM No comments:

Mark Twain Lake, Monroe County, Missouri: fishing was so slow, just had to write about it 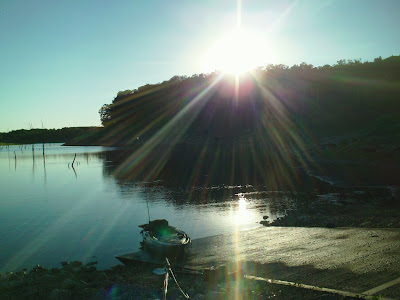 This is the path I took with the kayak on beautiful Mark Twain lake in northern Missouri.  I think this lake can be one of the more challenging lakes out there (I have caught nice sized bass in the past).  The lake is very low, just like all of the lakes in the Midwest.  I was throwing deep diving Wiggle Warts, 10" Mann's Jelly Worms, Chartreuse spinners, white spinners, Zoom trick worms, Red worms, almost everything I can imagine...it just goes to show, sometimes you "O-fer"...and that is alright.

I am looking forward to coming back in the fall to explore the lake even more....I love Mark Twain for its remote location.  It is chock full of structure, and reminds me of an undeveloped Lake of the Ozarks..

Posted by miketobin at 11:00 AM No comments:

Map your trips on EveryTrail

Get an email everytime we post a new article!

Here is the "Official" YouTube Channel for Fish Missouri

Maps of my favorite fishing spots in Missouri/Oklahoma